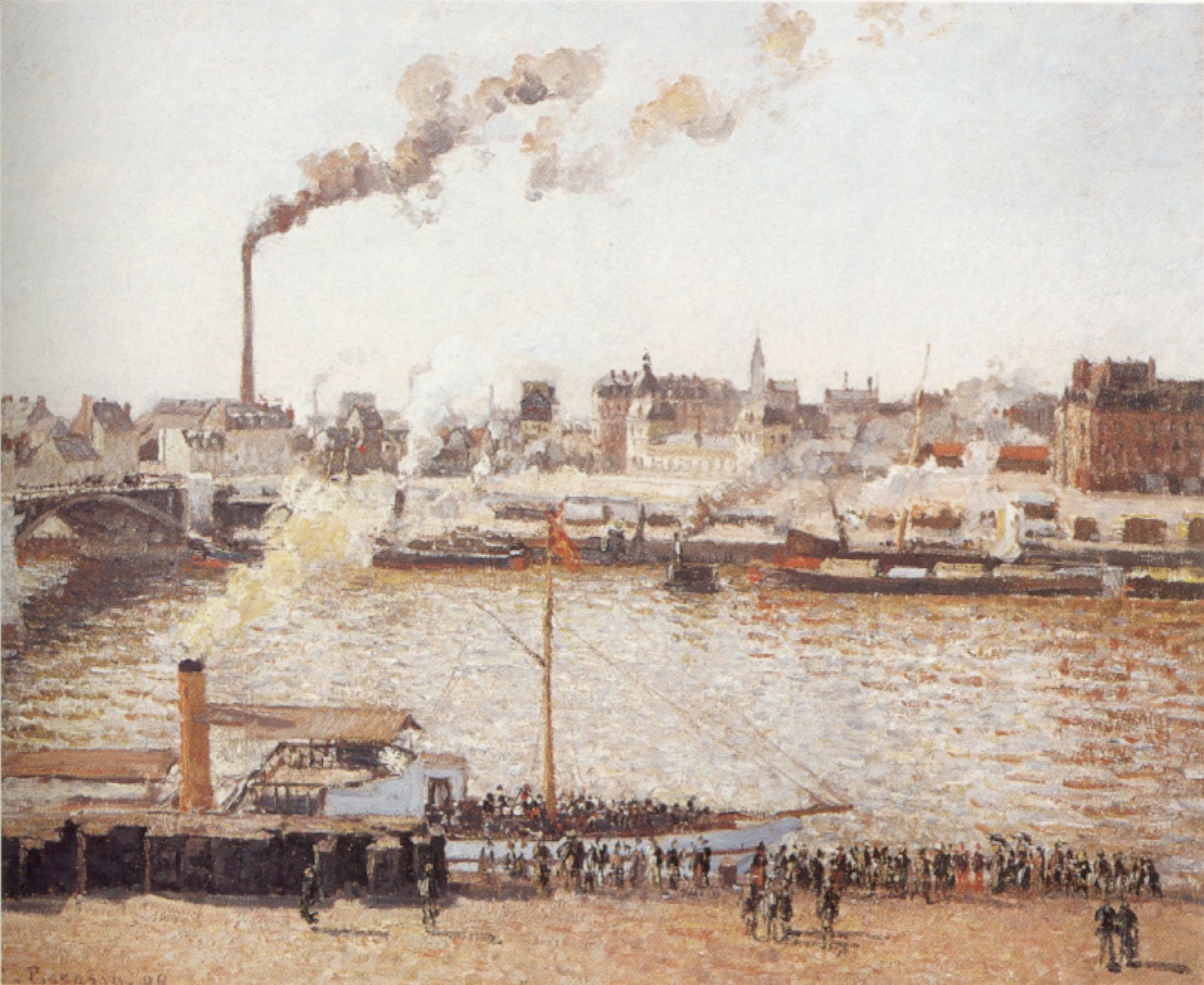 Camille Pissarro was a founding member of the Impressionist movement launched in 1874 by a group of artists who called themselves Anonymous Society of Painters, Sculptors, Printmakers, etc. To his contemporaries, and some art historians today, he was and is considered to be the “first Impressionist.”*

As discussed in Part I, Rouen was a great source of inspiration for Monet who undertook his most daunting subject, the façade of the Rouen Cathedral, as the focal point for his series of paintings from 1892-3. For Pissarro, Rouen became the place where he would return to the Impressionist style, after working in the Neo-Impressionist in the early 1880s and then Divisionist style with Signac and Seurat in the mid-1880s.**

Pissarro visited Rouen in 1883, following a suggestion from Monet, who favored the Normandy capital for its cathedral and overall medieval aesthetic. Unlike his friend, Pissarro extended his view beyond the cathedral and was drawn instead to the city’s industrialization, visible in the surrounding bridges, railroad station, and port.

In his drawings, etchings, and paintings of the city, the hustle and bustle are ever-present. It can be seen in the movement of crowds through the marketplace, the smokestacks and the array of ships that moved in and out of the busy port.

To Pissarro, Rouen signified something even greater: modernity in action. His return to a brighter color palette, short, quick, transparent brushstrokes and the painterly use of light and weather allowed him to represent the old and the new of the city in its entirety.

Pissarro’s failing eyesight prevented him from painting outdoors and so when he returned to Rouen in 1896, he stayed at the Hôtel de Paris, in a room overlooking the Seine, and from this point of view, he painted the Pont Boieldieu.***

The focus of this painting is the massive iron bridge, the Pont Boieldieu, that bisects the canal, separating the old city of Rouen from the encroachment of modernity, here illustrated by the carriages, boats, and crowds of pedestrians. The subtle purples, blues, and greens coupled with the quick brushstrokes indicate the effect on light on the scene: the overcast sky has layers of whites and purples; Pissarro adds a towering chimney billowing smoke, adding even more gray to the atmosphere. He used blues and greens to represent the shadows cast by the bridge onto the water.

In a letter written to his son, Lucien, in October 1896, Pissarro details how intrigued he is with the view from his hotel window, “the bridge Boieldieu, you should see all this in the morning when the light is misty and delicate. Well now, that fool Mourey (French art critic, active 1865-1943) is a vulgarian to think that such a scene is banal and commonplace. It is as beautiful as Venice, my dear, it has extraordinary character…” ****

Pissarro painted several views of the bridge throughout his time in Rouen, most notably Pont Boieldieu in Rouen, Rainy Weather, currently in the collection of the Art Gallery of Ontario. This painting will be part of an exhibition Impressionism in the Age of Industry: Monet, Pissarro and more, which opens on February 16.


In Pissarro’s Rue de l’Épicerie, the Rouen Cathedral looms over the Friday market that livened up the city’s Place de la Haute Vieille Tour. This scene, painted in 1898 was a new addition to Pissarro’s exploration of the city. In August of that year, he wrote to his son with the excitement of having found a prime spot in which to paint, after expressing frustration about the inability to find “attractive and interesting motifs” in Eragny. **** 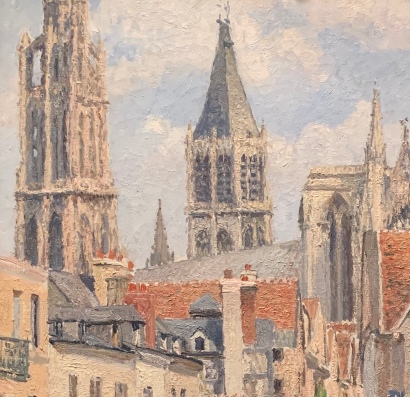 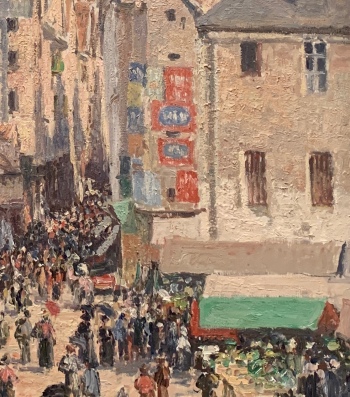 The color palette here is warm and bright, with light blues, whites, greens, and ochres, a change from the somewhat dull color scheme of his bridge paintings.

Like many of his other works based in Rouen, Pissarro made three versions of this market scene, but only the Met’s version illustrates the market in action. Unlike Monet’s Rouen Cathedral series, which places the famous monument firmly at the center of the composition, Pissarro’s focus was not the cathedral or even the buildings around the Place de la Haute Vielle Tour, but the masses weaving through the stalls and alleyways, the smells and the sounds that walk hand-in-hand with daily life. According to one astute observation by Christopher Lloyd, former curator of Queen Elizabeth II’s art collection, Pissarro’s interest was to document contemporary life, not history.*****

On March 17, 1896, Pissarro wrote to Lucien to complain that one of his dealers, Alphonse Portier, kept lowering the prices for his work. In the midst of this, Pissarro says that he wants to keep Roofs of Old Rouen (seen above) for himself, fearing a comparison with Monet’s paintings of the same subject.*** Pissarro preferred the outline of the cathedral against the backdrop of the sky to Monet’s “mysterious charm” that his technique gave to the facade of the looming monument. This painting stayed in the Pissarro family until it passed to Galerie Durand-Ruel, Pissarro’s long-time dealer at an indeterminate time.

Pissarro died in 1903 in Paris and is buried at the Père Lachaise Cemetery.