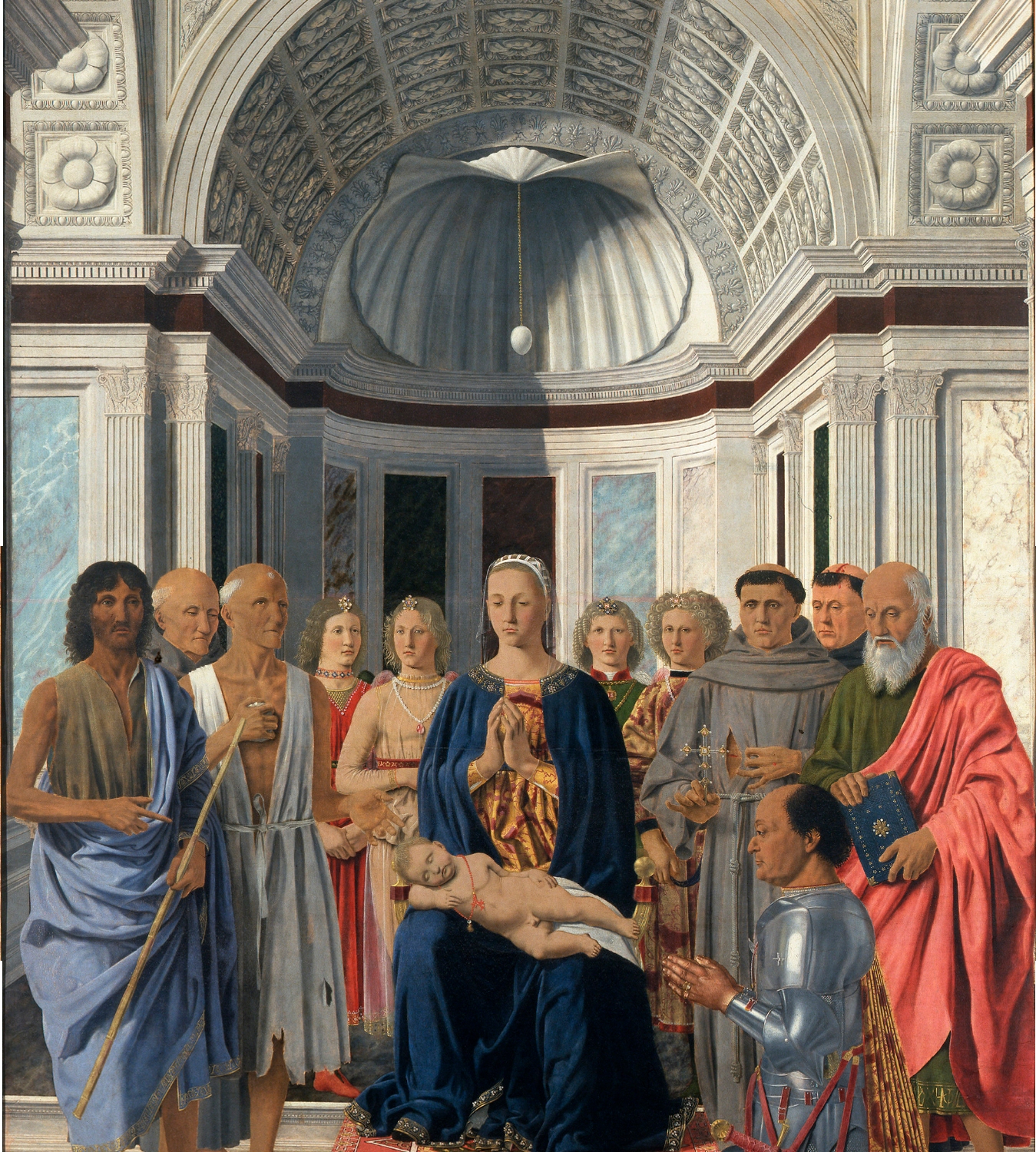 This week’s post is written by my good friend, Struan Watson, M.A. at the University of Glasgow.

Since 1435, Leon Battista Alberti’s (1404-1472) treatise on painting, Della Pittura, has set the groundwork for how (and why) artists in the Italian Renaissance represented pictorial space linearly and mathematically. Preceding its publication, Masaccio (1401-1428) had already made leaps and bounds in one-point perspective, most notably with his Trinity fresco (1427-28) situated in the Santa Maria Novella, Florence (the façade of which Alberti himself would begin designing around 25 years later), and also his fresco cycle in the Brancacci Chapel – also in Florence – neither of which need any introduction.

Filippo Brunelleschi (1377-1446) – famous for his construction of the dome of the Santa Maria del Fiore in Florence – is said to have ‘discovered’ mathematical perspective, as documented in Antonio Manetti’s biography of the great goldsmith/architect, Vita di Filippo di Ser Brunelleschi (c.1480). Manetti records the famous story of Filippo’s discovery as he stood in front of the Florence Baptistry. However, as far as we know, his discovery was not codified; it was not presented as a method, a practice, or a formula. This is where Alberti comes in.

Della Pittura is known to be the first codification of linear perspective, and Alberti named its primary method the costruzione legittima (figure 2).*

As such, Alberti’s costruzione legittima became the most dominant and pervasive method of representing space in Quattrocento and Cinquecento painting. From Bellini, Mantegna, and Leonardo, to Raphael, Michelangelo, and Titian, Italian artists could not detach themselves from this construction. What they could do, however, was find its limitations – its strengths and its flaws – and how to use these newly discovered devices to enhance the viewing experience for patrons and audiences then and now.

For Mantegna, this came in the form of foreshortening (e.g., Lamentation of Dead Christ c.1480); for Leonardo, perspective acted as a tool to serve his ambitious compositions and iconography at an unprecedented level (e.g., The Last Supper c.1495). Lastly, for Titian, perspective became more of a backdrop – a supporting role – for the more important modeling of the forms of his figures, favoring color and tone over line (e.g., St. Mark Enthroned c.1510), yet still heavily relied on the Albertian method.

What all these paintings have in common is a group of lines (orthogonals) that converge on a vanishing point; lines that in theory travel an infinite distance to a ‘point of infinity’. The truth of these lines is absolute and its geometry cannot be disputed. There is, however, one aspect of the Albertian model that breaks the rules; a place where geometry collapses and reality escapes. Piero della Francesca (1415-1492) was able to document this revelation as a theorem – an axiom – to which all artists subsequently obeyed.

While he is best known as a pioneering artist of the Quattrocento and a major player in the development of painting in Northern Italy, Piero was also a gifted mathematician. His treatise on painting, De Prospectiva Pingendi (1474-75), can be seen as a ‘response’ to Alberti’s much earlier 1435 publication. Piero provides ‘shortcuts’ – simpler practices to Alberti’s methods – in constructing perspective drawings. What is of most relevance to this article, however, is Theorem XXX in Book I of his Prospectiva (see figure 1). It is a theorem that details the drawing of that which can not be represented; the space that can not be real; a place the eye can not travel.

This theorem is concerned with what happens if an artist was to continue Alberti’s square-tiled flooring infinitely to the left and to the right of the painting. Shown above (figure 3) is a projection of Piero’s original axiom seen in the cover image (figure 1). The theorem dictates that if the Albertian construction – the costruzione legittima – extends beyond 90 degrees (i.e. it extends from ∠ AEB to ∠ AEC), the projection of the square tiles becomes warped, and that which was once square becomes anything but. The lengths of the ‘square’ sides are rendered illogical, stretched, squeezed, and impossible.

What were once rational, proportional squares have now become impossible quadrangles as seen with square CBFD. This is because of the length of CD (the orthogonal) is now greater than DF (the transversal). This simply can not physically exist. Leonardo would take this a step further by exaggerating the theorem from an extremely foreshortened angle (figure 4):

Tintoretto already has quite the reputation as an artist who employs sweeping perspectival constructions, plunging shafts of space, and – in the above example – a glimpse into a world beyond ‘real’, mathematical space. What is fascinating about this is that Tintoretto was most probably aware of the axiom that he was ‘breaking’, given that the subject who occupies the warped space at the far right of the scene isn’t actually part of the scene. He is a patron to Tintoretto and the donor of the painting to the Church of San Polo, pensively and internally viewing the scene as if it is a realisation of his imagination. He is, one could say, ‘beyond the reality’ of the scene, anachronistically placed into the Last Supper and so his presence inside the warped space is justified, because he’s not supposed to be there anyway. It takes an artist like Tintoretto to have the ambition and audacity to break away from the harmonic centrality of High Renaissance painting seen in Raphael.

This painting is indicative of the stylistic and philosophical change in Italian visual culture of the 16th century, spearheaded by the Venetian masters, who attempted to challenge the way we perceive and view painting. What Tintoretto did was call attention to Alberti’s system and – through Piero’s theorem – destabilize and undermine the system from within.

Even today, artists, photographers, and filmmakers cannot escape Piero’s axiom. Cinematographers, for example, still cannot extend beyond 90 degrees if they use square- or grid-like patterns in their camera shots; the same rules applied to Albert and Piero as they do to filmmakers today. David Tattersall, the cinematographer and director of photography for George Lucas’ prequel Star Wars Trilogy (1999-2005), faced the same problems as Tintoretto (figure 6):

Here, the grid pattern of the cityscape mirrors the traffic lanes of the flying vehicles above. Given the density of the city, the streets and divisions of the buildings can be difficult to distinguish. However, the patterns of the flying traffic can not escape the viewer’s gaze. On the far right, Tattersall has had to limit how much he can pan and rotate the camera and, in fact, reaches the very boundary of 90 degrees.

If the shot was to extend beyond 90 degrees, the traffic heading towards the sunset (the orthogonal) would stretch and warp itself – extending further than the traffic flying parallel to the camera shot (the transversal). Watch this scene for yourself and notice how the vanishing point has to track the movement of the camera so as to keep the grid-like structure of the flying vehicles secure and rational. Moreover, notice that the camera will not rotate beyond the 90-degree field of view.

Using the Albertian system and the discoveries of Piero, artists, photographers, and filmmakers – even that of Star Wars – must follow the rules and axioms of the Florentine mathematicians. Half a millennium after their deaths, Piero and Alberti still play a passive role in the creative processes that are integral to one-point perspective constructions.

Sources:
*ABCD is the frame or ‘window.’ O is the ‘eye,’ P is the centric point. Each of the orthogonals – the lines converging on P – are spaced equally apart. To accurately draw the transversals – the dotted-lines – a cross-section must be made by placing O at the same height as P – a horizon – and then drawing visual rays through the line XY, spaced in intervals equal to the orthogonals. Where these optical rays intersect line XY, the transversals are drawn, creating a tiled floor in the projection of ABCD.