I have just returned from presenting a conference paper at the University of Kent’s MEMS (Medieval and Early Modern Studies) Festival and was very fortunate to participate in such a welcoming and enthusiastic atmosphere. I highly recommend the MEMS Festival to anyone new in the field who wants to present research, make contacts, and be inspired in general about the myriad of ongoing research in the world of medieval and early modern.

The manuscript JenaU 4 is the largest choir book ever produced in the Mechelen workshop of Petrus Alamire, now in the collection of the University Library in Jena, Germany. It can be used to provide some insight into royal and courtly politics between the Habsburgs and the Tudors in the sixteenth century.

Petrus Alamire was quite an intriguing figure of the 16th century. Born in 1470 in Nuremberg, his surname wasn’t Alamire at all, but Peter van den Hove or Peter Imhof. Alamire was made-up and came from three musical notes: la mi re (an excellent way to brand yourself as an instrumentalist and music scribe). He began his career as the “scribe of music books” in the court of Philip the Fair in 1503, remaining there even after Philip’s death where he grew his workshop and became well-known for his lavish music manuscripts.* His manuscripts can be now found in the collections of some of the prominent libraries around Europe including the Belgian Royal Library, the British Library and the University Library in Jena. 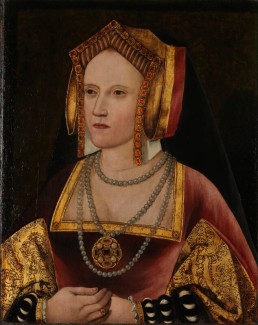 This manuscript was first proposed by Elizabeth Morrison** as a gift initially commissioned for Henry VIII and Catherine of Aragon by Maximilian I after the 1513 military victory of the Battle of the Spurs (see image below). This richly decorated manuscript is filled with masses devoted to the Virgin Mary set to polyphonic music and illuminations executed in the Ghent-Bruges style.***

Because of its impressive size and lavish decorative program, it can be thought of as a commemoration of the joint Habsburg-Tudor victory against France during the Italian Wars (1494-1559).

It can also be read as a document meant to usher the Tudors into the Habsburg lineage through the proposed marriage between Henry’s sister, Mary (seen in the middle) to Maximilian’s grandson, Charles of Austria (on the left). This alliance failed to come to fruition as Henry took the advice of Cardinal Wolsey and married his sister to Louis XII of France instead (seen on the right).

The Habsburgs were notorious for their masterful matchmaking skills and the phrase ‘Let others wage war: thou, happy Austria, marry,’ served as a testimony to the dynastic marriage alliances that expanded the reach of the Habsburg empire, and most successfully wielded by Maximilian I, whose marriage and subsequent marriages of his children and grandchildren added vast lands to its realm (see images below of various arms and flags illustrating the Catholic influence associated with the Habsburg Empire).****

Maximilian I and the Virgin Mary

Through the use of text, music, and image, Maximilian I promoted his ideology and legitimized his right to rule as Holy Roman Emperor. A visual pattern begins to emerge linking Habsburg lineage and the vast expanse of the Habsburg realm to images related to the Virgin Mary. In the above image, taken from the Triumphal Arch of Maximilian by Albrecht Dürer, Maximilian’s placement at the center of the composition, surrounded by angels mimics the composition seen in the Master of the Saint Lucy Legend’s Mary, Queen of Heaven (see image below).

An example of a Habsburg family tree with close visual connections to the iconography of the Tree of Jesse and yet another tie to the Virgin ( she was a descendant of Jesse) can be found in the Historia Friderici et Maximiliani (History of Frederick and Maximilian), made in 1508. The Historia was a biography of Frederick III and his son, Maximilian I, with text that was meant to serve as a didactic history of the House of Habsburg for the instruction of Charles V, Maximilian’s grandson. It is clear that the family tree (image on the left), executed by Albrecht Altdorfer, was modeled after the genealogical mapping of Jesus’ ancestors (image on the right). On the left, both branches of the Styrian and Tyrolian lines of the House of Habsburg spring from a single male ancestor, just as Jesus’s ancestors sprung from Jesse of Bethlehem, seen here firmly rooted at the base of the tree in the image on the right.

JenaU 4 as a Habsburg family heirloom

The gift of JenaU 4 from Maximilian I to Henry VIII can be seen to function as a transfer of a family heirloom. In giving a choir book filled with Marian imagery and music explicitly tied to Maximilian’s court chapel and dynastic philosophy, Maximilian offers up a symbol of both luxury and authority, while keeping a firm grip on the foundation that encompassed his own rule– a link with his ancestry to the divine. All of these elements work in tandem to express a desire to bring the recipient of the gift, Henry VIII and subsequently the Tudor family-at-large, into Maximilian’s imperial orbit.

Maximilian, Henry and the Order of the Golden Fleece

An additional goal of this attempted gifting of JenaU 4 to Henry was for Maximilian a promise of a new dynastic alliance, one that would grow Maximilian’s network of kinship ties, and gain another Catholic ally in defense of the Immaculate Conception doctrine.

This particular arrangement of images featuring the portraits of Duns Scotus and Pope Nicholas IV found on folio 29v (on the left) and (from top to bottom) Popes Alexander V, Pope Innocent V and Pope Sixtus on folio 30r (on the right), found in the border directly above Henry and Catherine provide visual cues specific to the doctrine of the Immaculate Conception, an ongoing debate in the fifteenth and sixteenth century and to which the Franciscans and the Dominicans were divided.

The Franciscans believed that Mary was born free of sin, while the Dominicans believed that her sin was negated in her mother Anne’s womb. The inclusion of the kneeling figures of Maximilian and Charles, coupled with the kneeling Henry in the upper right on the opposite page sought to unite these sovereigns in one holy mission—to uphold the Immaculate Conception doctrine. Activated by shared membership in the Order of the Fleece, begun by the Dukes of Burgundy, and whose foundation story of Jason and the Golden Fleece takes on a new meaning in the context of this doctrine as a stand-in for Mary’s grace. The analogy of the wet then dry fleece became a symbol of Mary’s immaculate conception– the wet fleece represented her grace while the rest of humanity was denied grace because of original sin, and likewise, the dry fleece meant that she was shielded from sin, while it permeated the rest of humanity. Henry, although not shown with his chain in this portrait, had been made a member of the Order in 1505, and thus, this new interpretation of the fleece would have seemed important to Henry and his devout queen. 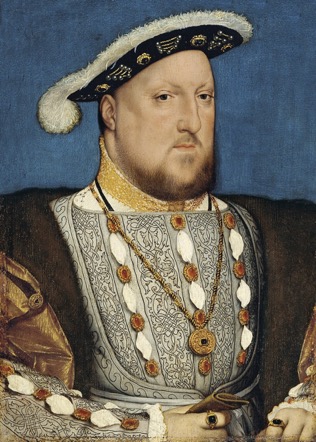 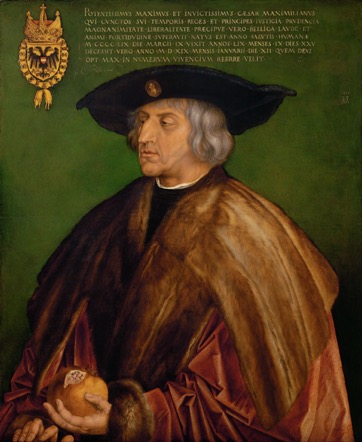 A failed attempt to forge dynastic and by extension, a more permanent diplomatic alliance is illustrated in the attempted gifting of JenaU 4 to Henry VIII and Catherine of Aragon by Maximilian I on the occasion of the joint military victory of the Battle of the Spurs. The contents and miniatures of this manuscript directly respond to Maximilian’s agenda of advancing his dynastic ambitions through marriage alliances by offering an heirloom to Henry and Catherine, coded with Habsburg devices. JenaU 4 became a part of Maximilian’s vast visual program to secure his legacy, which he believed would extend through a union of Mary Tudor and Charles of Austria. He also sought to find in Henry, a worthy supporter of the Immaculate Conception doctrine as a fellow member of the Order of the Golden Fleece. All of this, to Maximilian’s chagrin, became lost when this Habsburg-Tudor marriage failed to come to fruition.

*** The Ghent-Bruges style is characterized by naturalistic landscapes and figures, and decorated borders comprised of foliage (including plants and flowers), insects and birds. For more on this style, see Roger Wieck, Time Sanctified: The Book of Hours in Medieval Art and Life, New York: George Braziller Inc., 1988.

**** Hannah Mowrey, “The Alamire manuscripts of Frederick the Wise: intersections of music, art, and theology,” Ph.D. dissertation, University of Rochester, 2010 and Flynn Warmington, “Jena 4, Charles V, and the Conquest of Infidels.” Paper read at the Annual Meeting of the American Musicological Society, Atlanta, 2001.

*****Sermon 24 of St Leo the Great: “In which rod, no doubt the Blessed Virgin Mary is predicted, who sprung from the stock of Jesse and David and fecundated by the Holy Ghost, brought forth a new flower of human flesh, becoming a virgin-mother.” See “CHURCH FATHERS: Sermon 24 (Leo the Great)”. Newadvent.org.

Same.
Whoever made this has won the internet. #newyearwheezing
My mate 🥳
Happy 569th birthday @uofglasgow! I’m so grateful to call this legendary institution my alma mater and to all the fantastic memories, visitors, friends who shared in my experience. I also learned a lot of art history too 😋. You don’t look a day over 250! 🎂🍾
%d bloggers like this: